Robert Tomalin graduated from the IB Diploma Programme (DP) at the United World College (UWC) of the Adriatic, Italy. He continued his studies in political philosophy, Italian and Swedish at University College London and completed an Erasmus year at the University of Lund, Sweden. He is now a dedicated educator and serves as the Director of Colegio Gran Bretaña in Bogotá, Colombia, an IB World School. 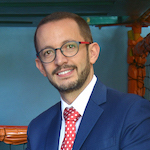 When I was 11 years old the Head Teacher of my primary school in England, Ted Wheatley, told me that I should apply to join the United World College (UWC) movement when I turned 16. I didn’t think anything of it until five years later when he posted me the application form (we are talking about the days before the internet existed). I knew that I didn’t stand a chance of being selected, but I completed the form out of respect for him remembering me for all that time.

“Two of the best years of my life followed in that small village called Duino.”

To my absolute surprise I was invited to UWC Atlantic College in Wales for my interview in 1995, and when I found out that I was selected to represent the UK at the UWC of the Adriatic in Italy, I could not believe my eyes. Two of the best years of my life followed in that small village called Duino, where I met some of the most important people in my life and learned some of the most valuable lessons imaginable.

I graduated with my IB diploma in 1997. Mr Wheatley saw something in me that I was unable to see myself. Had he not woven his magic and nurtured me in this way I know I would not be where I am today, that I wouldn’t think the way I do, and my understanding of my place and responsibility on a local, national and international level would be totally different.

Henry Thomas was my English A higher level (HL) teacher. He is held in such high esteem by his ex-students that I think it could soon be approaching a cult. His knowledge about literature, about history, and about world cultures meant that he was able to teach in a way that made connections to the world outside of our specific subject that kept us totally connected and engaged. He wasn’t just an incredible teacher, but he cared about all of us deeply.

For me, as a 16-year-old living in a foreign country without my family around me, Henry very much played a father figure role. He was the one who inspired me to dare to dream, he was the one who supported me and guided me through my university application process, and I am lucky to say that even though he has since retired, we stay in touch, and every time he calls me “young one” (and any of his former students) — I feel that a part of the universe remains constant, and it brings me great pleasure and comfort.

Since graduating with my IB diploma from UWC of the Adriatic, I went on to complete a UWC 3rd year project (sometimes known as a gap year) at the SOS Children’s Village in Mbabane, Swaziland, before returning to the UK to study political philosophy, Italian and Swedish at University College London, with an Erasmus year at the University of Lund in Sweden. It was while working in Mbabane that I knew I had to follow my passion for learning and teaching, but that I would want to throw myself fully into educational leadership.

I led the DP accreditation process at my former state school in Bedford, UK, before joining an IB World School called Colegio Gran Bretaña (CGB) in Bogotá, Colombia, where I am now the Director. This year I am also leading a synergy project between CGB and The Victoria School (a Continuum IB World School) as their Executive Director. I have been trained as an IB educator, workshop leader, site visitor and examination inspector and am a proud member of the IB educator network (IBEN). I also sit on the Executive Committee of AACBI (The Colombian Association of IB World Schools). I get to work with the world's most incredible children, teachers and families, and I love every single day.

“An IB programme…is so much more than a collection of subjects.  It is a global movement, and a worldwide family, with a sense of heart at its core.”

As an IB diploma and UWC graduate I have always been committed to service, and as such I am in my sixth year working voluntarily as the President of the National Committee of UWC Colombia, I am in my third year as a member of the UWC International Council, and I also form part of a team of volunteers on a mission to found a UWC in Colombia, which would make us the only UWC in South America. The conclusion of my MA research is that the DP would be the best programme of study, and so we intend is to apply to offer it there too.

My advice for all students studying in an IB programme is to remember that it is so much more than a collection of subjects. It is a global movement, and a worldwide family, with a sense of heart at its core. It is the only programme of study that I have ever encountered that forces you to do things that are good for your body, for your soul and for the wider community, as well as for your mind. What a luxury! Your IB results will never define you, but the way you apply what you learn (and how you learnt it) most certainly will.