Ahmed Tarqui Antezana graduated from Colegio Mayor Secundario Presidente del Perú, the first public school in the country to implement the Diploma Programme (DP). He is currently studying mechatronic engineering at Pontificia Universidad Católica del Perú. When he finishes studying, he would like to accomplish an agriculture automation project and bring solar power to communities in Peru that do not have electricity. 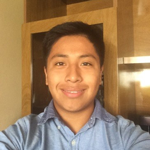 I was one of the first 100 DP students at Colegio Mayor Secundario Presidente del Perú in Lima, the first high-performance school (Colegio de Alto Rendimiento - COAR) to implement the IB DP in the country. It really motivated me, since it was a big academic challenge. I set higher goals for myself than I had previously, higher than I ever achieved before. We underwent psychological assessments and all the teachers gave their perspectives on the students. They selected 100 out of the 300 students. It was a good experience, but there were also a lot of conflicting emotions because we came from all the departments and provinces in Peru: all the best students in the country were gathered in one place. We lived, ate and slept there, since it was a boarding school. We felt like a family among our peers, and the fact that we IB students were in a separate building surprised us a lot but, in the end, I think that it was a shared success. It was a positive experience that we were able to carry with us over time. Colegio de Alto Rendimiento Central is currently the largest of the more than 14 High-Performance Schools in departments throughout Peru.

A lot of things about the DP interested me; for example, carrying out creativity, activity & service (CAS) activities, with the corresponding volunteer work and focus on social problems.  We were also told that we would have the most qualified teachers. They explained that we would have to complete a research project and a well-argued extended essay that would be assessed externally. We also studied the theory of knowledge course, which is only offered by the IB, and which would help us to develop an open mind. These all stood out to me, and I would not have been able to take these courses if not for the Diploma Programme. So, I made it my goal to be accepted onto the DP so that I could really boost my development.

One of the most valuable subjects for me was mathematics. It gave me sounder knowledge for when I started university, since everything that we studied during high school was more in-depth in the science courses. This prior learning facilitated my integration and adaptation to university life. The language subject really helped me to boost my development, since we gave presentations all the time. It helped me to not be afraid of public speaking and helped me to round out my non-academic skills. In addition, we weren’t just solving math problems: we also had to complete structured reports; this meant that mathematics and language were balanced out. I was able to solve a mathematics problem and I already had the tools to draft a report.

“My advice for students who are thinking about pursuing the Diploma Programme is to not hesitate.” It really is a key that opens a million doors for you.”

Both the teachers and the students were under a lot of pressure to achieve good results, since we were the first High-Performance School to offer the DP in the country. We didn’t have a lot of free time. We didn’t have a lot of time for hobbies, although we did do athletic activities. At Colegio Mayor Secundario Presidente del Perú we celebrated InterHouse, a day of sports and cultural competition at the highest level. Groups of students were organized, and each group was identified by the color of their house (red, blue, yellow, brown and green). Finally, we would get together at a fraternity party. I wholeheartedly believe that each InterHouse competition balanced the demands of the IB with personal demands.

One of my greatest satisfactions after the Diploma Programme was obtaining a full academic scholarship funded by the state. Out of the 100 students who took the DP, only 25 of us prepared exclusively for the award of the diploma, and we achieved it. The rest received certificates. The award of the diploma was very competitive, but it allowed me to start as sophomore at Pontificia Universidad Católica del Perú without taking an entrance exam, which put me in an excellent position for applying for a scholarship. Obtaining the IB diploma helped me to receive a full academic scholarship that covered all of my university, degree and personal expenses. I am currently studying mechatronic engineering, and I have many aspirations. For example, I  believe passionately in the benefits of automating the sowing, cultivating and harvesting of agricultural products.

I am very grateful for the quality of teachers that I had. I remember Rosario Santos, my theory of knowledge teacher. She had a special way of seeing things and of thinking. She encouraged us to see the world from a different perspective and she invited us to debate our preconceived notions. It made me reflect on the fact that mine is not the only point of view; that there an infinite number of possibilities that are true and valid. I also remember the mathematics teacher, Mahurtua Aguilar, and the teacher Iván Yupanqui. They both helped me develop my love of science. They even were a determining factor when choosing my current academic degree. My language teacher, Norma Pagaza, was a faithful friend and advisor. There is a long list of great professionals and people who helped us achieve our goals; the success we had would not have been possible without the passion of each teacher.

I benefited from the DP a lot. I think that CAS was very valuable. I didn’t know how to knit, and I had a lot of classmates who also didn’t know how. But I learned, and we knitted blankets to send them to Puno, which is one of the coldest departments in Peru. During winter, some children who live there die. It is very unfortunate that some families have nothing to keep themselves warm. Even animals die because the entire ground is covered in ice. The water literally freezes. We had to act immediately. We knitted blankets and we sent them to Puno as a way to lessen the effect of the cold and its unfortunate consequences. We also visited shelters and gave guidance classes to kids from different schools.

The extended essay has been valuable at university for helping me figure out which projects I could tackle in the future and what I could focus on. For the extended essay, I worked on a renewable energy project. I focused my research on solar kitchens and solar ovens. Since I wrote that extended essay in school, now I am able to think about automating agriculture or installing solar panels in municipalities that do not have electricity. It has opened up possibilities and new projects for me.

Over the course of the DP I developed various skills, such as open-mindedness, which was a core theme in the theory of knowledge course. As a result of an IB education, I react with tolerance when I meet people who think differently from me; whether it’s not believing in God, or telling me that something well proven as scientific fact is not true. I try to find meaning in what they are telling me. I think that this means having an open mind, and the next task is integrating the range of values and qualities that the IB programme teaches us into our personalities.

During the Diploma Programme I took part in a national robotics contest. This distracted me a bit from my studies. In 2011 we travelled to The Netherlands to represent Peru at the FIRST LEGO League (FLL).  I was right in the middle of the Diploma Programme and in the middle of exams, and I had to travel. I fell behind significantly, but the teachers helped me. At some point I thought about withdrawing and leaving the DP because I felt that I wasn’t keeping up with my classmates, the courses and the demands, but, in the end, I scrapped that idea and continued. The DP was very beneficial for my future; it taught me to be perseverant and not to give up on my ideals.

My advice for students who are thinking about pursuing the Diploma Programme is to not hesitate. It really is a key that opens a million doors for you. I can’t imagine not having my IB Diploma. I don’t know where I’d be. I don’t know if I would have received the scholarship. I don’t know if I would have gained admission to the number one university in Peru. I don’t know if all of this would have happened. But the DP made all this possible. Don’t think twice. It will help you develop so many skills that may not even know you have. You will learn that not everything is about studying; you also have to help, since not everyone is as lucky as you. You should be able to use your knowledge to help build a better world.