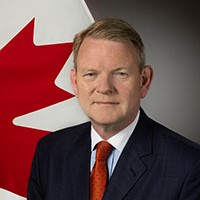 I have worked as a teacher, a journalist and as a Canadian foreign service officer and now I’m the Ambassador of Canada to Mexico. However, I’m also a proud International Baccalaureate (IB) graduate who can say from experience that a great education gives you an enormous sense of hope and satisfaction.

I was enrolled in the IB Diploma Programme from 1976 to 1978. In fact, I was the first student from Ashbury College, Ottawa, to complete the programme in English and French, studying history at higher level. I also took economics, biology and mathematics.

“The IB showed me how to become a global citizen. A great education gives you an enormous sense of hope and satisfaction."

After attending the University of Toronto and the University of Oxford, I joined the Canadian foreign service in 1989. In my early years, I was a legislative assistant to two Ministers of Foreign Affairs (1993-1995) as well as to the Prime Minister of Canada (1995-1997).

Then my career moved abroad. First, I was the Second Secretary and Vice-Consul in San José, Costa Rica (with cross-accreditation to Honduras, Nicaragua and Panama). Later, I served as Ambassador to Peru and Bolivia (1997-2001), as Ambassador and Permanent Representative to the Organization of American States (2006-2010) and as Minister and Deputy Head of Mission in France (2014-2019). For my work, I have been awarded the Orden del Sol del Peru and the Queen Elizabeth II Diamond Jubilee Medal.

I think one of the main benefits of IB programmes is the international perspective they provide. Through IB assessments, students are able to see how they measure up by comparing their work to others’. And when I was a student, I needed that challenge.

Many of the teachers I had put me through my paces, notably in subjects that were not among my strong suits, such as mathematics. Additionally, a valuable skill that I was taught in the IB Diploma Programme was how to perform well on exams.

My experience with IB programmes has had a significant impact on my personal, social and professional life. The IB showed me how to become a global citizen and put me on the path towards an international career serving my country, Canada.

When it comes to education in Latin America, I’m particularly interested in student exchanges, especially between Mexico and Canada. Expanding opportunities in both directions is something well worth working towards, but COVID-19 has hit the education sector in Latin America hard. As we adjust to what is becoming the new normal, we are hopeful that the economy will recover. Across the Americas, we need to discuss the lessons that all of us have learned during this health crisis.

IB programmes not only help students professionally but they also prepare them for adult life. Traditional education is often wary of asking students to contemplate great philosophical questions, but I have fond memories of being enthralled by my theory of knowledge course as a 17-year-old Diploma Programme student. There, I was able to reflect on issues that I still find challenging today, such as ethics.

In summary, a quality education will help students professionally, but it alone is not enough to take them all the way to the top. The development of well-rounded students takes place both inside and outside of the classroom; it happens through outdoor activities and in conjunction with the community. Venturing beyond what is familiar to us is key. We have to put ourselves in other people’s shoes. Though there is a lot of work left to be done, the answer, in part, lies in education and student exchanges.