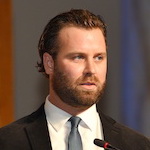 Ever since I was a kid, I was fascinated by other cultures and would study maps of the world for hours on end. In high school, I also became interested in politics, human rights and international affairs. Pursuing an IB diploma aligned with these interests and I thought it would lead to opportunities to travel and study abroad. I was also keen to learn other languages, which was a key part of the IB diploma.

I was most inspired by my French teacher, Lesley Davies. She encouraged me to work hard and pursue my passion for French, which wasn’t very popular among many of my peers – let alone my male counterparts. She was a tough teacher in many ways, which many people found challenging. For me, however, she made me a disciplined student and pushed me to achieve my best. Madame Davies also organised a school trip to New Caledonia. It was my first time overseas and first experience of being immersed in another language for an extended period of time. It was a trip for which I will forever be grateful.

"I have followed my passions and taken advantage of as many of the opportunities that I have been presented with as possible."

I have worked hard and made many sacrifices to be where I am today – working in the field of international development and traveling the world. I have followed my interests and tried out many different jobs and organisations – sometimes for better, sometimes for worse. I have followed my passions and taken advantage of as many of the opportunities that I have been presented with as possible. I have tried to learn the lessons from all the mistakes I’ve made. At the same time, I also try to celebrate my achievements and be proud of the positive change that I have helped to bring about in my work.