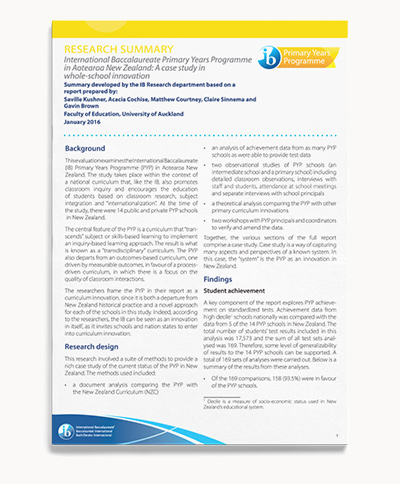 This study examines the International Baccalaureate (IB) Primary Years Programme (PYP) in Aotearoa New Zealand. At the time of the study, there were 14 public and private PYP schools in New Zealand. All but one of these schools included student populations of high relative economic status. Researchers undertook classroom observations, interviews with students and educators, document analysis, an analysis of achievement data and workshops with principals and coordinators to verify the data. The results from the standardized test analysis indicate that achievement in the PYP schools generally exceeds achievement among other high decile schools nationally. Additionally, while the New Zealand Curriculum (NZC) and PYP are largely compatible, there were a few points of difference, notably an emphasis on international-mindedness, inquiry and action in the PYP. Researchers highlighted a number of key findings based on school observations, specifically the emphasis on inquiry-based learning, a constructivist approach to knowledge and global/local interactions. Students also displayed a great deal of agency in their own learning and teachers tended to act as facilitators of the learning process. Lastly, the authors conclude that while most of the PYP schools serve populations of relatively high decile students, an inquiry-based curriculum would also likely benefit low decile schools and students.