Labinot started at Westminster Academy after studying A Levels for a year. He had found that he wanted to study a course more closely aligned with his ambitions for the future, and felt that the IB CP fitted his needs perfectly. 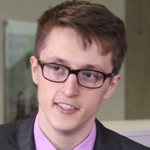 On arrival, Labinot quickly established himself as a star student in all his subjects, especially ICT. His hard work more than paid off; he achieved a triple Distinction starred (the top grade possible) for his BTEC Extended Diploma in ICT. In July 2015, he received the Outstanding ICT Student award at the national BTEC Awards. He was able to build on his success by pushing himself beyond the classroom, being named as Runner Up for the BAFTA Young Games Creator Award. He was a stalwart of the IB Business and Management course as well, where his natural leadership abilities served him well; he could often be found after school teaching revision sessions to other students.

International Baccalaureate and Westminster Academy are thrilled that Labinot will be going on to study Computer Science at Kings College London next year, and we expect to hear great things from him in the future!